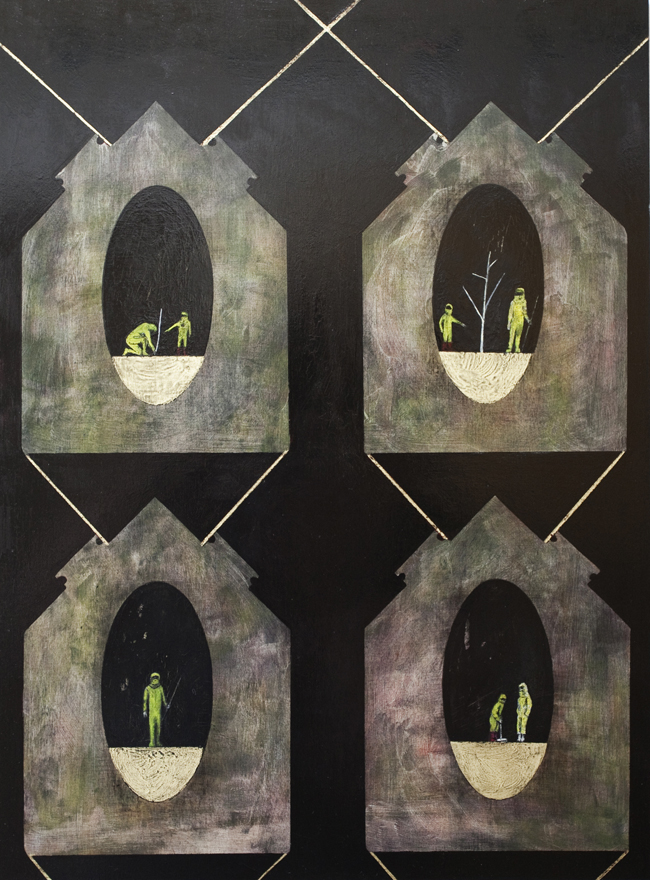 Midlands based artist Sarah R Key is exhibiting a new series of paintings at Tarpey Gallery from 7th September to 5th October, 2013. Titled Wealth of Ages, the new work for this exhibition marks a departure from her recent shows, both in uses of imagery and media.

“We are thrilled to be able to give our followers at Tarpey Gallery the first opportunity to view this exciting new series of work by one of the most talented and sought-after painters in the region”
Gallery Director, Luke Tarpey

The show will comprise of works on panel, including media of tempera and gold leaf. This new body of work draws on imagery gleaned from ancient and medieval sources, referring to armoury and military equipment; using historical motifs to reflect on contemporary mores. This work also sees a development and blurring of the way that figurative and abstract elements are employed; areas in painting that Sarah has shifted between in prior bodies of work.

Over the past decade, Sarah has developed a profile in contemporary painting, both nationally and internationally, exhibiting in major art venues in London, Stockholm, South Korea and Dresden. Sarah’s work is represented in numerous private collections, as well as garnering numerous art prizes and nominations over the past five years, including selections for the Royal Academy Summer Show, the prestigious Mostyn Open and Threadneedle Prize, where Sarah was a shortlisted finalist.

Artist Sarah R Key says of the work “This is a marked departure for me. Smaller scale pieces exploring a more intense approach to process, and developing a particular type of imagery that explores further ambiguity in working with figurative and abstract forms. The ideas behind the work reflect on power, war, inheritance and privilege; mixing up contemporary and historical motifs”.