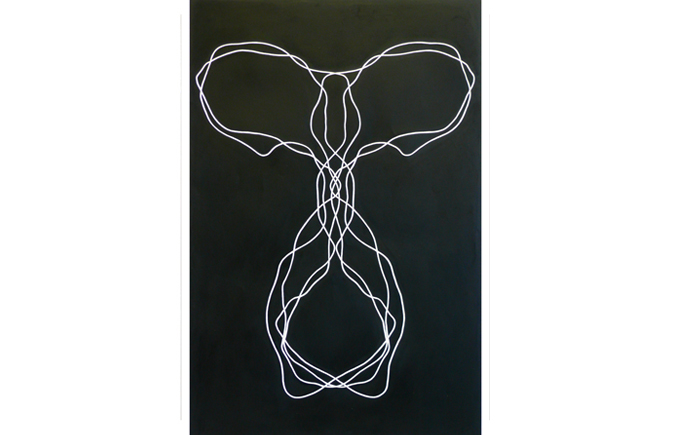 After the critical acclaim of last years Continuum in Symmetry solo at the Djanogly Art Gallery, Marek Tobolewski follows up with ‘Sym’ – his 1st intimate solo with the Tarpey Gallery.

Exhibiting new works with key pieces from the DH Lawrence Pavilion 2010 residency, with a common tread of the continuous line in rotated and repeated symmetry. Large scale abstract diptych paintings & drawings from the ongoing Continuum series sit alongside small studies and a 2011 edition of 9 refined trace 2LC SymM V9 drawings made specifically for Sym.

A constant motif in the artist’s formal abstraction is the arc of a circle – albeit in a state of perpetual evolution. Tobolewski reveals an ongoing preoccupation with the endless reinvention of his own compositions, where he continually returns to existing works, adjusting structures and refining each individual flow of a line. The Continuum series has evolved over many years, formal abstractions dealing with negative line with reflection, mirrored linear forms, layered surfaces of pure colour and exposed under painting. In the outset, many of the works attempt to employ
systems of production but during the making process, spontaneity and intuition inevitably take over. Long gone are the descriptive titles of the A-symmetrical works of the past, for several years Tobolewski’s titles have become abridged codes: 2LC DipSym Neg or 1LC SymM+R cataloging the process of the line.