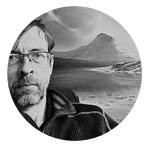 2016 Solo Exhibition at The Tarpey Gallery

Private collections in Europe and USA

‘My childhood and youth were spent on the edge of the North Yorkshire Moors. I became accustomed to being able to reach the high moor within only minutes of leaving my door. A powerful and noble solitude was mine whenever I chose, huge vistas stretched in all directions, the towns below diminished to manageable scale, suddenly insignificant. It was here that I began landscape painting in the mid 1980’s, seeking to bring a piece of that exhilaration and clarity back to my room.

My paintings are inspired by nature, I merely seek to paint things as I honestly see them. To this end I use the camera as a tool for recording scenes and then back in the studio I work from great numbers of photographs. The camera is unsurpassed as a device for recording topographical and lighting information. It has been a tool of artists since the renaissance. The paintings take so long to complete that it is not always possible to execute them en plein air. Though I have worked directly from nature I do not consider any advantage to be gained thereby. The amount of detail I require often necessitates long hours with a small brush under controlled lighting conditions. However I do not consider my works as copies of photographs for the following reasons; the range and intensity of the hues of paints exceeds those of the photograph, the texture and resolution of paint is of a higher order, closer to nature. In addition, the tactile qualities of paint and the range of possible application techniques in the translation of the raw paint into form, closely parallel the forms and processes of nature. The finished painting will, especially when viewed ‘in the flesh’ elevate any subject well beyond a level attainable with commonplace photography and thus demand a longer engagement. Some interpretation of the photographic source does occur of course if it results in a stronger picture, for example I will often only use the topography and improvise the lighting effects or I will collage elements from several photographs to make an image. The development of hi quality digital photography and manipulation means that I can now be at the easel working from large numbers of photographs taken that same day while the landscape experience is still fresh in my mind.

I consider the language of the actual ‘photographic’ appearance of things to be universal. It does not require special education to understand or depend upon supportive or explanative text. Painting is a communicative medium and as such should be able to deliver it’s content directly to the viewer without resort to other media. Using this language of appearance I am trying to paint pictures distilled from my notions and musings upon the tension between the natural world and the onslaught of humankind. To this end I paint a range of subjects from the hard core urban through the pastoral to the sublime solitude of mountain summits though in recent years I have tended towards the latter, largely for my sanity and my own walls! It is more important now for me to celebrate the numinous in nature rather than its absence in the cities.’

Recently I have been painting mountains in oil on large scale canvases, inspired mainly by my exploration of the Black Cuillin range on the Isle of Skye, Scotland. I have developed new methods and a more imaginative approach whilst retaining a concern for realism and also balancing that with the aesthetics of the paint surface itself. The new methods, involve the building of a digital model of locations using real topographical data. It offers me the opportunity to step away from the usual viewpoints and perspectives and enables me to finely tune composition, atmosphere and lighting.

The resulting images seem to me adrift in time, maybe prehistoric, or far in the future. The land I have re-created is as geographically accurate as I can make it but there is one important difference; it is all intended to be common land. Go ahead and sustain yourself, fish, forage, camp where you like, graze your beasts. There are no walls, fences, hedges, status symbols or tokens of ownership nor any recognisable objects beyond the forms of landscape. This makes them almost abstract with only a minimal suggestion of a narrative. What that might be I intend to leave to the viewer to imagine.

In this way I made some big paintings of the Chatsworth estate last year two of which were bought by the estate itself. I am proud to say my work now hangs among the masters in one of the biggest private art collections in the world. This was enough to persuade me to explore the method further.

Tarpey Gallery is proud to present ’Synthesising the Sublime’ an exhibition of new works by Nottingham based painter John Cheall. As the winner of our solo exhibition prize at Nottingham Castle Open last year, part of our ongoing sponsorship of this prestigious open exhibition, the artist has produced a stunning new collection that will be on display in our main exhibition space from 24th September – 30th October, 2016.

These paintings form a continuation from the ideas explored in the two prize-winning pictures shown at the 2015 Nottingham Castle Open. All are inspired by the mountain ranges of the Isle of Skye in Scotland, specifically the Black Cuillins. This is a choice based purely on the drama and visual spectacle of these rugged coastal mountains, expressing the thrilling, disorienting sense of vertigo and exposure.

John has developed new methods and a more imaginative approach whilst retaining a concern for realism and also balancing that with the aesthetics of the paint surface itself in a desire to do justice to the awe-inspiring nature of this unique landscape. These new methods, involve the building of a digital model of locations using real topographical data. It offers the opportunity to step away from the usual viewpoints and perspectives and enables the artist to finely tune composition, atmosphere and lighting.

“The process was fascinating and quickly drew me in, there was a compelling sense of control over this new world and it soon took its own direction as unforeseen results and mutations invited exploration. Taking it further I could see it was possible dramatize forms beyond the current reality and maybe capture more of the spectacle outside what is attainable by the usual means. Rather than occasional painting expeditions, doing my best under grey skies I can now create the landscape myself, orchestrating the lighting from multiple sources, placing the cloud, aligning the sun, editing, fine tuning the elements and translating them into a visual language that I can paint.From this process of landscape construction I was drawn like an artist of the Hudson River School to not only explore the new frontier but also creating it as I go! In awe of the possibilities and at the same time demystifying creation itself.
John Cheall, 2016

Selecting from among many hundreds of these synthetic images of real locations, strange forms emerge, dramatic radial compositions, twisted mountains and exaggerations of the landscape produce a new and compelling topography. By manipulating these natural elements to compose these new works, John is merging the boundaries of a digital and analogue world to create a dramatic and compelling landscape of impossible peaks and theatrical skies.

We hope you can join us for what promises to be one of the most exciting solo exhibitions at the gallery to date.