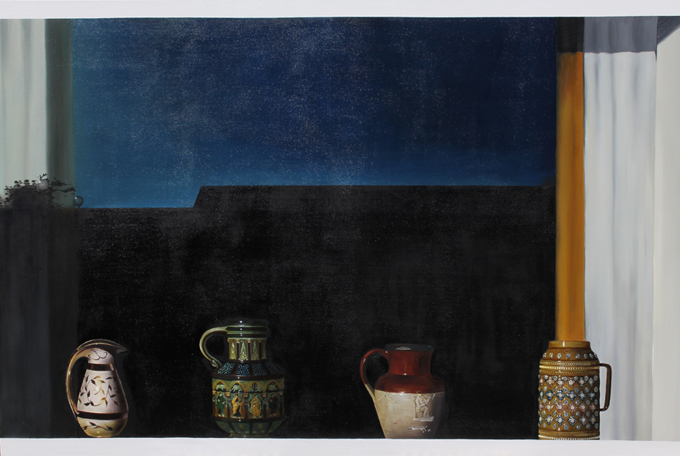 Up-and-Coming Leicester based painter Jane Domingos is currently making a name for herself in the Midlands as a accomplished and exciting painter with an eye for the surreal, about to embark on her first solo show in the Midlands, she is definitely an artist to keep a close watch on.

Having recently completed an MA in Art & Design Studio Practice from Loughborough University, Jane has been busy winning awards and selling work at high profile exhibitions, including one of Jane’s works Promoted to Glory which was exhibited at the Royal Academy of Arts Summer Exhibition in London 2011.

Jane’s upcoming solo exhibition at Tarpey Gallery is a direct result of her recent success in Open Competitions in the Region, having already been awarded the Peoples Panel Prize at the prestigious Nottingham Castle Open 2012, Tarpey Gallery Director Luke Tarpey was quick to pick out Domingos’ Ethereal Oil Painting Through a Glass Darkly for a prize of a solo show at the Castle Donington based Fine Art Gallery.

“I was struck by the conviction of the work, the strength of the ideas and the subtlety of the painted surface.” – Luke Tarpey

Jane’s current work is concerned with scale and the notion of the horizon and follows on from earlier work that dealt speciﬁcally with the ﬁnal moments of life and the idea of a presence created by objects left behind. The work has been described as uncanny, surreal, serene yet ominous, possessing otherness, an intense silence bordering on airlessness. The exhibition will feature a selection of Jane Domingo’s most recent work.