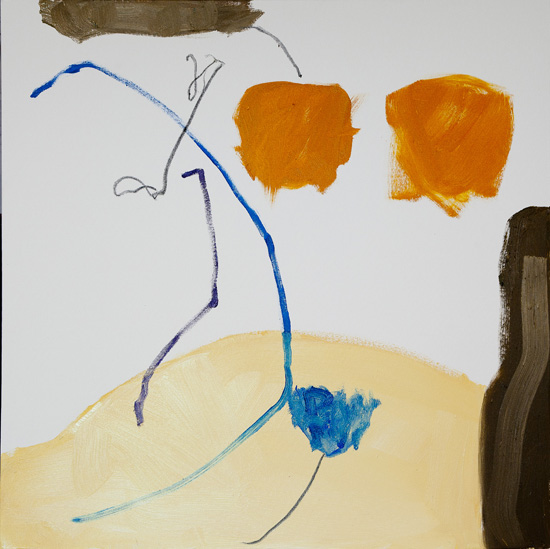 The first mixed show at Tarpey Gallery, this intimate exhibition will be made up of a diverse selection of work by artists of international standing, whilst also introducing and supporting artists at earlier stages in their career.

‘Introducing’ will feature work from Nine of our represented artists and reveal an insight into their varying art practices.

In 2007 I began a completely new series of paintings. These may loosely be described as “Reflections”, as the paintings are based on studying the surfaces of water. The surfaces of both water and ice, offer a new way in which to observe the natural world. These surfaces may also have debris, leaves, blossom and algae upon them – are we observing the reflections or looking directly at the objects? I have not wished to make this too obvious or certain. Also I have manouvered and pushed around the image in order to respect the two dimensions of the picture plane and hope to tread a fine line between the figurative and the abstract.

David Manley is an artist and writer with over thirty years experience of contemporary art production, curation and writing. Most recently David’s research falls into two distinct though interrelated activities original artworks and commentaries on contemporary work. There are three strands to the origination of artworks.

Current work is focused on photographic means to explore landscape and environmental concerns.

New paintings draw upon similar interests and a selection comprised a solo show at Harrington Mill in November 2008 and participation in the Ostrale 09, Dresden, Germany in summer 2009.

Other recent visual research concerns series of works. LIrelande Del Sud and the current Le Pays Minervois, play with collage, digitisation, and a mimesis. These projects question painting and photography in the context of place and memory. LIrelande Del Sud was exhibited at the University of Derby in 2003. Works from ‘Le Pays Minervois’ were shown in ‘Digitalis’ curated by the artist John Rimmer at the Sekler National Museum, Romania in spring 2008. Another body of similar work, Simple As Breathing was exhibited at The Art Planning Room in Toyko, Japan in 2006 and at Deda, Derby in 2008. This uses a similar process of drawing, collage, photographed and digitally manipulated imagery.

Denise Weston’s recent work reflects her ongoing interest in the perception of memory, fragmented story and the significance of the human presence as figment, icon and narrative device.
The idea of archiving memory is a significant factor in all of Weston’s work and Gerhard Richter’s work, ‘ 48 Portraits’ and Marlene Dumas’ series, ‘ Models and Rejects’ are significant influences in the production of this series of paintings. Using childhood images as starting points, Denise Weston’s ‘Girls’ confront the viewer through a series of visual confrontations, exploring issues of female identity and the sense of time passing and shifting.

Marked by strong expressive character, David Crouchs’ work is excited and detonated into expression of what happens at the tensions between the apparently `out there` and the intimacy of moments of engagement, feeling, memory: bodies and places: figuration and abstraction merge and flow. The work momentarily articulates its own patinas as it emerges; pieces of performance in searching, working at that tension of realisation and its illusion. Moments made mobile, soft or urgent, passingly reflective or deeply felt: Andalucia, Donegal, west Cornwall, Cumbria; the garden, the studio, being with people.  I work mainly in paint, increasingly larger oils and fleeting strong watercolours; charcoal and mixed media including varied pastels, expressed in a continually developing body of work.

Joan Ainley has been described as an enigmatic artist whose practice includes installations, editions, multiples and unique pieces. These are exemplified by their capacity for multi-layered readings. One of her particular interests is with the permanence of the apparently ephemeral and the use of camouflage not to conceal but as an agent to focus attention. Making connections and linking the past, present and future are central to her work in which leitmotifs include peace, pilgrimage, recollection and memory, both public and personal. Clearly defined characteristics of this practice are the integrity and elegance of its deceptive simplicity. The work has the capacity to engage the viewer’s attention with issues of truth and perception. It acts as a catalyst to focus thought and reflection.

SEARCH: RECALL REFLECT REMEMBER a series of exhibitions, installations and editions made to celebrate the sixtieth anniversary of peace at the end of WW2. This sequence commenced in Leeds 2004/5 and closed in Berlin 2005/6. It is the beginning of an ongoing body of work covering the period 2005-2014 in a series of installations, exhibitions and publications. (2014 being the 100th and 75th anniversaries of the outbreak of WW1and WW2). The artist book of the same title has been purchased for Tate Britain and Estelle Morris described SEARCH: RECALL REFLECT REMEMBER as both ‘timely and poignant’.

Sometimes masked, the creatures in the work are often indiscernible in their identity. The paintings combine an open approach to narrative content with a formal approach to painting the flat grounds. Alone or in gangs, the creatures may be confronting the viewer, or be involved in some sort of spurious activity. Their motives are furtive and uncertain, their moods variously melancholic, bold, mischievous and solemn. The suggestive power relationships between them are deliberately ambiguous and provocative. The paintings attempt to absorb and transform some of life’s absurdities, however they do not entirely trust human beings to deliver their message. The idea here is one of an ostensibly human ethical code transplanted onto another kind of being, staring out of the paintings through different eyes. The work also draws on contemporary and historical cultural references that collapse into the dreamlike or nightmarish, transformed into an imaginary world that is perhaps solely inhabited by these odd hybrids. These creatures may well be travelling through time and memory, imagined or real, to reveal a bemused and dangerous legacy. They do not obey rules. They have no identifiable history. They have no fixed agenda.

Steven Ingman’s imaginative take on the urban environment encapsulates his transition, memories and self discovery. From a rural childhood upbringing to the Metropolis western living environment. This urban shock, the bedazzling phosphorescence of street lights, the noise of fast moving traffic, intense unnatural colours and glimpses of architectural forms erupting from the gloom – created an impulse to paint cities in the dark. These works capture the assault on Ingman’s senses made by these nocturnal surroundings.

In producing the work Ingman explores the relationship between the photographic and painted image considering implications of there being a transition between the two. In this process he attempts to create a heightened critical engagement with the photograph. This human interaction with paint, the strata and revisions of the canvass allow the artist to provide an added dimension, a reflexive and critical relationship to what it records. Ingman achieves this through analysing the stuff of oil paint and its effects through a combination of painterly techniques, handling (knife, brush-work, pouring etc.), mixing different mediums, using extreme impasto and contrasting matte and gloss surfaces.

The work begins with place. Locations are selected for their familiarity or chosen by tracing where family members worked and originated from. This personal mapping begins with drawing in situ; these sketches become the precursors to the final images worked through many processes of etching. The working strategy is a spontaneous and playful one, allowing the images to change and grow in their making, as they become multi layered with new surfaces and ideas. The result is intricate and complex prints that explore a labyrinth of conversations with landscape.  The locations enable a physical response to landscape and engage in a dialogue of questions concerned with belonging, identity, rootedness, liminality, and home. The space between us. The said and unsaid. The work combines private explorations with public discourses that aim to share something of how the artist views and experiences the world around.