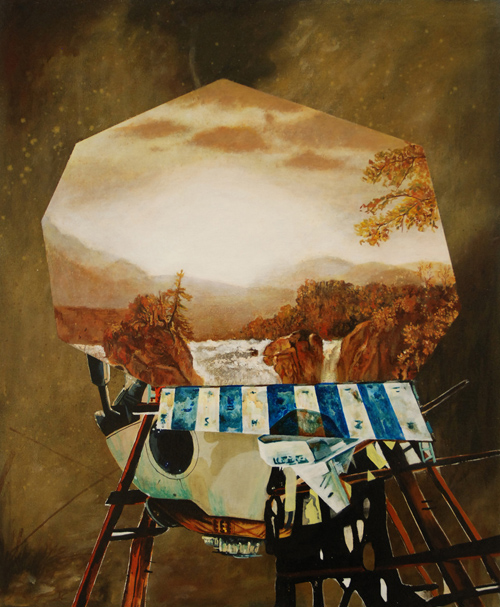 The imagery in the work is selected from a multitude of influences that are often chosen for their prophetic and apocalyptic undertones. Images are filtered through a historical materialist perspective, where the past is seen as ongoing and shifting in meaning, dependent on the position of the present.Idealized romantic landscapes are held up by increasingly fragile supports, which are pieced together from the debris of spacecraft, industrial structures and painterly remains. Through the appropriation of resonating ideologies such as Romanticism and early Science Fiction, the paintings seek to not only question our perception of nature, but paintings’ historical and current role in that.

Each work presents a unique exploration of the vacillation between abstraction and representation. The paintings, deliberately descriptive and expressive in their handling of paint, tempt the viewer to try to find a reference, in order to satisfy the urge to assign specific meaning to their intensity. This blurring of boundaries between the abstract/figurative and the representational calls to question not only the legitimacy of portrait painting today but also the notion of kitsch in an era where detail and dexterity may be considered bad taste. Each individual work is a confrontation between matter and metamorphosis, between paint as raw material and painting as imaginative transformation. The work hints at a recognisable present but it does so by emphasising the contemporary as being a result of the overt accumulation of its revered past.

I like to think of the works as martyrs to portraiture, appropriating a generic mythology in order to allow for a contemporary re-evaluation of their function within a critical context. By making paintings which are derived from an exhausted starting point, I am able to invade the history of the work with my own manifesto. They become a sort of Frankenstein’s Monster, reinvigorated by a fresh perspective that, subsequently, asks the viewer to reconsider notions that were previously taken for granted. Therefore, the de-familiarisation of the history of the work acts as a device that allows the viewer to examine the wider genre of portraiture anew.