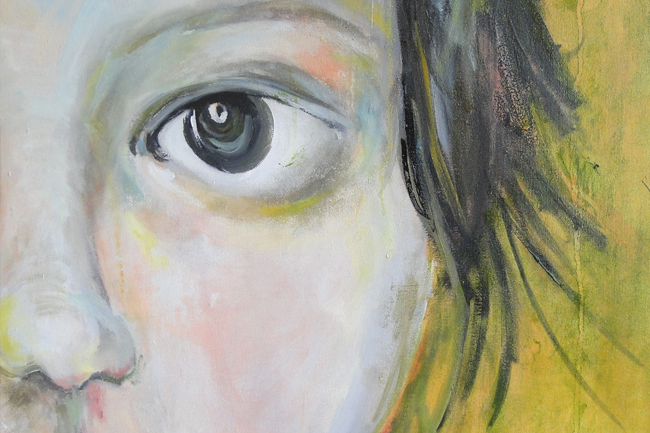 From 30th June to the 4th August 2012, Nottingham based Artists Denise Western and Inge Tong will be exhibiting their new bodies of work at Tarpey Gallery.

The Djanogly Art Gallery and Tarpey Gallery, Castle Donington, are proud to announce Denise Weston’s first solo exhibition in the region since 2006. Split across the two venues, this widely anticipated exhibition by the Nottingham-based painter includes confrontational portraits of children reflecting her interest in female identity and thearchiving of memory. Working with traditional mediums and by building up rich layers; the paintings act as visual metaphors referencing the passage of time, memory and change. Weston will also be exhibiting a series of boxed collage works and sketch-books that explore the nature of the representation of the human form as visual image.

Exhibiting alongside Weston, Inge Tong presents a new series titled ‘Into the Woods’. This ambitious new series of work consists of multi-faceted children’s blocks that have endless possibilities in the tales they tell. Each piece has an opening to a different story setting one image against another allowing the stories to merge together in a puzzle of colour and activity. Tong’s work plays with shadows and colour using oil paint, inks and charcoal. Tong’s art practice is influenced by the natural world; human and animal; their close environment and the stories and immediacy that relates to them.

This exhibition runs alongside Western’s solo show at the Lakeside Arts Centre in Nottingham, which runs from 23rd June – 19th August.

The multi-faceted children’s blocks have endless possibilities in the tales they tell. Each piece has an opening to a different story setting one image against another. The stories merge together in a puzzle of colour and activity. The other worldly scenes talk to you of woodland landscapes and the magic they hold.

This is my new venture, which I find as enjoyable as a child might in piecing a story together exactly how it wants.