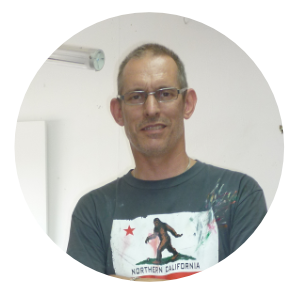 Galleries Magazine, October 2012
Over the last decade or so Nick Hedderly has become one of the most successful artists working in the East Midlands, winning open art ehibitions in Nottingham and Derby with his atmospherically charged and intensely painterly cityscapes and his solo show at the enterprising Tarpey Gallery in nearby Castle Donington makes it very clear is in no way undeserved. For these are quiet, thoughtful works, full of an understanding of the way buildings and cityscapes become, as he himself puts it, “a repository of so many of our feelings and memories.”
Nicholas Usherwood

Tarpey Galley is proud to present ‘An Alternative Utopia’ by Nottingham based painter Nick Hedderly from 12th November – 18th December, an exhibition of new oil paintings with a focus on the rural landscape and the bicycle that has taken the artist on a journey through the scenery he paints with the love and care he affords to these special and varied environments.

For a long time he has enjoyed and been inspired by the drawings of Frank Patterson (1871 – 1952) who produced evocative images of cycling from the late 1890’s to the early 1950’s. The painting “Scotland with Sarah, 2016” could be a typical Patterson view with the cyclist rolling along a winding road that weaves and stretches invitingly into the distance – but this contemporary take features a woman cycling through a landscape on a Brompton (Hedderly and his partner took their Bromptons by train to FortWilliam and then cycled out west to the Ardnamurcan peninsula – this painting is from the one dry day that week)

Hedderly started his working life as a rural postman north of Nottingham, near Eastwood.  He is a member of Cycling UK (formerly the CTC, Cyclists’ Tourists Club) and is a volunteer for Sustrans promoting sustainable travel.  He gave up his car last year and now uses his bicycle as his main form of transport.  He wishes he’d done it earlier.

The urban environment and edgelands continue to be a major source of inspiration for the painter.  For Hedderly ‘edgelands’ are the inbetween, unregarded places places around our cities and urban areas – canals, riverpaths, industrial estates, cut throughs.  As well as being the source of inspiration for Hedderly they are also form part of the alternative network he uses to travel around and experience the environment.

Hedderley is perhaps one of the most well known and successful painters in the East Midlands, passing on his knowledge through classes and courses whilst also winning both the Derby and the Nottingham City Open art competitions in 2002 with different paintings of the iconic Trellick Tower in Notting Hill, which he followed up with a solo show at Derby Museum and Art Gallery on the same subject.

We hope you can join us for this celebration of paint, the landscape traveled through and that most modest form of transport the humble bicycle.

“Cycling is possibly the greatest and most pleasurable form of transport ever invented. Its like walking only with one-tenth of the effort. Ride through a city and you can understand its geography in a way that no motorist, contained by one-way signs and traffic jams, will ever be able to. You can whiz from one side to the other in minutes. You can overtake £250,000 sports cars that are going nowhere fast. You can park pretty much anywhere. It truly is one of the greatest feelings of freedom one can have in a metropolitan environment. It’s amazing you can feel this free in a modern city.”
Daniel Pemberton, The Book of Idle Pleasures