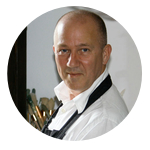 Tim Southall was born in Staffordshire in 1961 and grew up on the edge of heavy industrial heartlands of the Black Country. He studied Fine Art at Northumbria University and then printmaking Royal College of Art and l’école des beaux art, Paris. Based in London for twenty years, in 2001 Tim moved to the beautiful countryside of the Costa de la Luz – the coast of light – in Cadiz Province, southern Spain.

Situated just three miles from the Atlantic coast and the beach of Trafalgar made famous by the battle of 1805, is Tim’s studio. This unspoilt corner of Spain provides much of the inspiration and starting points for his work. This connection to nature runs through both his paintings and prints.

The base upon which he builds his work is metaphysics: existence, objects and their properties, space and time, cause and effect, and possibility. Using these guides, he expresses how he sees and experiences the world. This he does mostly through the landscape or the figure in the landscape.

Over and above the metaphysical, he strives to make work which is delicate and shows a lightness of touch along with an eye for detail and nuance. At the same time he uses the language of drawing and mark-making in an attempt to describe emotional depth and atmosphere. He also delights in using visual devices or narratives to convey some of the great classical themes and hopefully create something new and fresh with a modern voice. The resulting works are rarely direct representations or specific places but distillations of various places and experiences and pose the two basic questions of metaphysics: What is ultimately there? and, What is it like?

Tim is an active member of the Printmakers Council and exhibits regularly with them. He is also a member of Birmingham Printmakers where he produces his silkscreen prints, but the bulk of his work is produced at his studio in Spain.