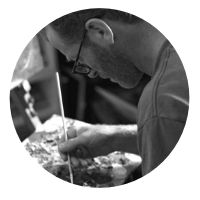 Observations made while walking in the Derbyshire countryside have always been my inspiration.

Whether it’s drawings, sketches, photos or just memories, I bring the outdoors back to my studio as my starting point.

To catch some of those fleeting glimpses and observe seasonal changes, I’ll often return to the same place for months or years before capturing and reinterpreting those subtleties to truly reflect the landscape’s character.

2016 Winner of the Ashbourne Festival