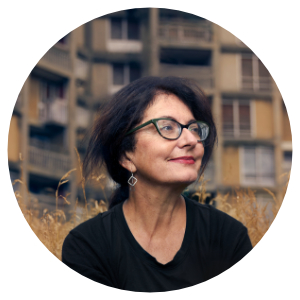 Mandy Payne lives and works in Sheffield, U.K.  Originally, she trained as a dentist and worked in the Community and Hospital Dental services for 25 years. She had a career change in 2012 to work as a full-time artist, shortly before graduating from the University of Nottingham in 2013 with a BA Fine Art. Since then, she has exhibited her work both nationally and internationally.

I am a painter / printmaker, my work is inspired by urban landscape, gentrification with a particular interest in social housing and Brutalist architecture. For the past 9 years, intermittently, I have been exploring Park Hill in Sheffield, the Grade II* listed council estate and one of Britain’s largest examples of Brutalist architecture. The site is currently being regenerated and is in a state of flux- which makes it an interesting place to observe.  Part of the estate has been converted into shiny, luxury flats whilst half remains boarded up and derelict. I am particularly drawn to the un-refurbished parts where the memories and layers of the past are almost tangible. Between 2017 and 2019, public access to Park Hill became very limited so during this period I started exploring other sites in London, Salford, Huddersfield and the Northeast, usually, similar estates to Park Hill that were undergoing demolition or gentrification.

For my paintings I wanted to work with materials that had a direct physical connection to the sites I was depicting, namely concrete and spray paint, constructing little concrete canvases to work on as a substrate. I have continued to explore the same subject in print, focussing on stone lithography, frequently collaging the lithographs made on to squares of cast concrete as a metaphor for the estate.
The intention of my work was to document what was there before it was lost by creating observational paintings that spoke of the displacement of the established communities and the temporality of the urban landscape.

Between 2015-2017 she completed a two-year Fellowship in stone lithography at Leicester Print Workshop for which she received Arts Council Funding and an Elizabeth Greenshields Foundation Award. Her solo exhibition at Huddersfield Art Gallery in 2019 was also supported by Arts Council Funding.

Her work is held in public and private collections both in the UK and abroad.