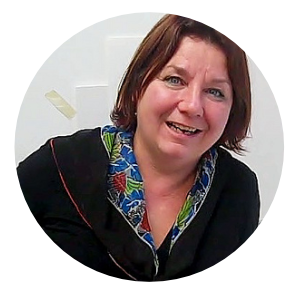 I explore the emotional attributes of experience and sensation though colour, depth and form. I’d describe my practice as lyrical abstraction. My prints begin as large screen-prints on Fabriano paper, often incorporating elements of monoprint or collage. I frequently refer to the print process itself by collaging cut up elements, such as the registration acetates of the print.

I orchestrate my personal array of marks within the frame and energetically pushing out of the edges. Repeatedly the shapes are dancing, reacting, hitting on each other, accordingly they are given movement based titles: Roundabout, Tumble, All fall down and Hoky-Koky.

Increasingly, I make one-off prints and, other than an idea of essence of the piece, I don’t have a fully formed idea of the final state until it’s completed – it’s a process of looking, thinking and improvisation, though a difficult/playful dialogue with the work.

“Laine’s printmaking practice deserves wider acclaim. Her painterly approach and unerring sense of colour produce prints that are both dynamic and beautiful. She is becoming hot property in printmaking circles- a true printmaker’s printmaker”