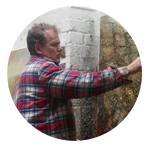 We are thrilled to welcome Sheffield based painter Kristan Baggaley to our group of represented artists with an exhibition of new work which all relate to Burbage Moor, near to where the artist was born, an exposed area of open moorland in the Dark Peak District. Over the years the artist has returned to this landscape numerous times, in all seasons and weather conditions. The paintings have all been painted this year and relate to the space and light synonymous with the artists experience of the area combined with an emotional response to the sense of place.

Baggaley has developed a very physical painting technique when interpreting the landscape in oils, splattering, dripping, scraping and eventually building up dense layers of paint and sand. The surface of the work is all important adding material from the landscape to the canvas including grit sands and dried vegetation, including heather, bracken and cotton grasses. Cutting and dragging the media around the canvas, using palette knives, forks, spoons etc. These processes combine to reinforce the lack of permanence in the nature of landscape. For Kristan, the properties of a landscape can best be discovered when he has revisited a location numerous times. In painting familiar subject matter, the inessential falls away leaving only the essential.