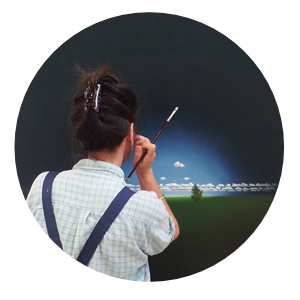 Jane Domingos is a British artist born in Leicestershire, where she is currently living after a long spell in Yorkshire as well as stints in London and Portugal.

Jane has a recent MA in Art & Design Studio Practice from Loughborough University and she is also a graduate of Leeds University where she undertook a BA in Art History & English Literature. Jane has worked part-time as both a freelance ﬁne artist and graphic designer for 20 years while raising ﬁve children.

One of Jane’s works Promoted to Glory was exhibited at the Royal Academy of Arts Summer Exhibition 2011 in London.

Materiality, process and facture are integral to the expression of my themes. Current work is concerned with scale and the notion of the horizon and follows on from earlier work that dealt specifically with the final moments of life and the idea of a presence created by objects left behind. The work has been described as uncanny, surreal, serene yet ominous, possessing otherness, an intense silence bordering on airlessness. Visual tropes and materiality are used to add complexity and sophistication to the appearance of the two dimensional quality of the painted surface, the medium of oil being an excellent vehicle to further explore subtlety of surface. Different approaches to painting within the same constraints of medium, size and format are often employed to utilize some of the many techniques available to the oil painter.

The concept of freedom opposed to captivity and the notion of the horizon as hope for a better other or an endlessly shifting boundary is an underlying theme of much of the work. Where freedom is dealt with in a very literal sense it is hoped it will provoke thoughts of a more metaphysical nature. The approach adopted for recent paintings has been in part a response to the non-sequitur of surrealism by a consideration of it’s converse, the cliche; the ritualization and predictability of human experience and emotionality. I am interested in the degree to which visual metaphors, symbols and motifs of representational objects operate as signiﬁers or function as signiﬁed concepts. Precipitated by the critique that the paintings bore similarities to the work of certain surrealist artists particular attention has been paid recently to the contextual framework of surrealism and the surrealists’ ambition to disrupt narrative conventions by liberating text or object from preconceived contexts. Essentially it is the ability of the human mind to transcend the physicality and ﬁxed forms of the spatial and temporal world we inhabit that is core to my work.
Jane Domingos, October 2012