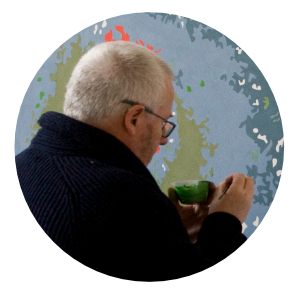 David Manley is an artist and writer with over thirty years experience of contemporary art production, curation and writing. Working mainly through series of related works his concerns range widely across subject matter. The current series – titled ‘Deadly Delicious’ – reveal the beauty that results from the electron microscope when examining serious viruses and subverts these images through oils, watercolours and drawings in charcoal. Alongside this the project ‘Forty Years A Hard Road’ re-examines the artist’s activity from 1970 to 2010 through a series of forty canvases each 30 x 30 cm.

Alongside the painting series a variety of purely photographic projects continue including ‘the Sermones de Annuciatione’ showing in Seoul, Korea in May 2012 and ‘Walking In The Windy City’ shown at Art On Armitage, Chicago in 2011.

In the late 90’s and until 2004 David worked on a large scale with colour field paintings that explored his responses to a variety of locations from Cornwall to Italy by way of Ireland and other locations. Other series since 2004 focused on photographic means to explore landscape and environmental concerns.   ‘LIrelande Del Sud’ and ‘Le Pays Minervois’ played with collage, digitisation, and question painting and photography in the context of place and memory. LIrelande Del Sud was exhibited at the University of Derby in 2003. Works from ‘Le Pays Minervois’ were shown in ‘Digitalis’ curated by the artist John Rimmer at the Sekler National Museum, Romania in spring 2008. Another body of similar work, ‘Simple As Breathing’ was exhibited at The Art Planning Room in Toyko, Japan in 2006 and at Déda, Derby in 2008. Work drawn from all the above was exhibited in a large solo show ‘(un) Shore Lines’ that opened at the Centro de Arte in San Joao, Portugal in 2005.

In 2011 his solo exhibition at the Tarpey Gallery ‘From The Earth Wealth’ comprised a personal journey through North West Leicestershire where the artist lives and the gallery is located. The 45 paintings, 6 digital pictures and postcard photographs each represents a town or village in the district, and the series as a whole was an idiosyncratic and very personal visual take on the spirit of the district.

Recent curatorial work included a season of exhibitions exploring the connections between contemporary painting practice and the digital in the Ex Libris Gallery, Derby (2005/06) including works by Sarah Key, Thomas Hylander, John Rimmer and Edward Rennie. An exhibition with catalogue accompanied the Conference What Happened Here summer 2005. In 2011 he curated ‘Through A Glass Lightly’ an exhibition of UK artists in Visby, Sweden. Catalogue introductions have recently included ‘Sfumato’ by David Morris and ‘Curiosity’ by Richard Sadler with whom he is currently developing a monograph of Richard’s work from the 50’s to the 90’s.

Galleries Magazine, July 2011
In an area (just south of Derby and Nottingham) not exactly awash with top-class commercial galleries and at a difficult time like the present moment, the opening of the Tarpey Gallery in the small town of Castle Donington in late 2009, has been a cause for some celebration. For this is a large, light and beautifully converted space (a former barn?) dedicated to showing top-class uncompromisingly contemporary work. The current show, by David Manley, a distinguished former Dean of Faculty at Derby University, is no exception. Entitled ‘From the Earth Wealth’ it consists of 45 small abstract images that draw their inspiration from 45 settlements in North-West Leicestershire where he lives. Starting from photographs taken in each of these locations, Manley consistently achieves rich, densely atmospheric works unmistakably imbued with a very personal sense of place – a powerful modern reworking, in effect, of the English romantic idea of genius loci.
Nicholas Usherwood