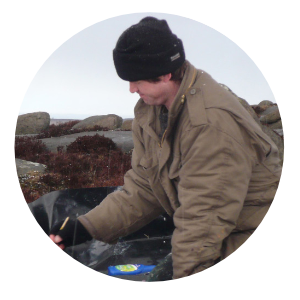 Brought up on a farm in rural Cumbria means the landscape and nature is what excites me and will always be my subject of choice.
I started painting outdoors seven years ago and it has gradually built up to the point where that is nearly all I do. How and what materials I use has changed a lot in an attempt to find my way into this glorious subject matter. Gone are the accidents, drips and smudges to be replaced for the last two years by a thick generous application of oil paint. A conscious decision that the accidents were a step removed and had become to easy almost that if I had continued it would become formulaic and to easy. It felt removed because it wasn’t all in my control and making each mark more directly feels closer, more honest, hand made and unique.

The thick paint makes it more like an object in its own right and less about the illusion of being real and more if you like “real”. A reminder that this is not the actual landscape it is a painting of it. There is no attempt to hide the fact this is paint or its application. This is something that separates out modern landscape painting from pre 20th Century and in my view was far to quick to become old hat in the contemporary Art world considering that Artists used to hide their application before then. It feels like in our rush to invent the new we didn’t properly explore the possibilities.

In addition the thick paint makes the painting more alive in the way that as you move around the work it subtly changes as the different lighting effects it and as a result to me seems far more complex and interesting than flat paintings.